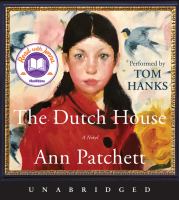 The Dutch House A Novel By Patchett, Ann Audiobook CD - 2019
1 - View All Summary

A new story from a favourite author is always something to look forward to, but when that novel is read for the audio version by the inimitable Tom Hanks, you know you’re in for a treat.
Ann Patchett’s The Dutch House is the story of Danny Conroy and his sister Maeve. The siblings grow up in a large Pennsylvania mansion built after the Second World War by Dutch immigrants. Cyril Conroy, Danny and Maeve’s father, bought the house hoping to make his wife happy, and to showcase his own success. Eerily the house is full of the portraits and possessions off the Dutch family that lived there before them.
Little does Cyril know that his purchase of the house will set off a chain of events that will affect the lives of Danny and Maeve for the next five decades.The children’s mother, Elna, fells uncomfortable in the enormous mansion. For her the decadence of the house represents all that’s wrong with the world. She eventually flees, abandoning her children and husband, and it falls on the no-nonsense Maeve to take care of her little brother. Just as life seems to be getting back to normal their father moves his new wife, Andrea in, with disastrous consequences. The Dutch House is a modern day fairy tale and Andrea is the quintessential evil stepmother duping the children of their home and inheritance.
Patchett has long been revered for her strong character driven stories such as Bel Canto and State of Wonder, and The Dutch House doesn’t disappoint. Hanks, the narrator, embodies the character of Danny as if he’s sitting in his armchair telling you all about his life. His narration adds a richness and depth to Patchett’s already compelling story.
If you’ve read Patchett’s earlier novels you’ll know to expect the very best writing and that you’re going to meet characters who will stay with you long after turning the last page. If this is your first novel by her, I think you’ll finish it looking forward to exploring more of her stories.