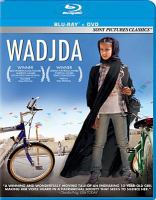 Wadjda is a shrewd business negotiator/entrepreneur free spirited girl. She's born in a different era yet ruled over by two who live traditional/contradictory lives. Wadjda's school's principal and mother do their best to instill traditional, proper, Muslim womanly etiquette in Wadjda but Wadjda lives unapologetic, respectful, and unafraid. Wadjda is not intimidated by men and at such an age, she unlike her principal and mother, has received a proposal for marriage.
The take-away of this film is that Wadjda is the new face of her country. No more will women be intimidated and run from men who make cat calls, stare, and speak loudly at them. Wadjda gives no man power over her. With an unveiled face, Wadjda presents a posture of courage, does not shudder in the presence of men, and gets what she wants.

Truly Amazing. The strength and determination of this young girl to go against the cultural norms of her family & society. Eye opening to the many things we take for granted here in the US. The simple pleasure of being free, to ride with the wind in her hair was so beautifully captured.

It is a sad reality if Saudi kingdom and how women or girls are treated in society. It is a shame that the real Islam which is from the Qur'an never said for women to be treated unequal at all. Too bad the Saudi kingdom is full of snakes who don't care about people at all all they want is their blood money never helping anyone other then themselves with greed. I liked this movie I found it very interesting but sad even at her school their was no understanding women towards theses girls at all.

A ten-year old girl and her mother live out parallel stories in this film about life in an oppressive society. It's difficult to tell where the bulk of the oppression is coming from: school, the mother's deadbeat husband, the society in general, or the government and the fundamentalist version of the religion (which are intertwined) -- but both of the main characters rise above it. A touching movie.

Wadjda is such a wonderful character, the embodiment of dedication, focus, and determination. Such a moving and inspiring film!

This is the first full-length feature film shot in Saudi Arabia made by a female Saudi director.
The film offers a simple story of a 10-year old girl who wanted to buy and ride on a bicycle.
From this film, it is interesting to learn more about the culture and the Saudi life.

This movie has several plot threads beyond Wadjda attempting various ways to earn the 800 riyals to buy the coveted bicycle. Her father is considering marrying a second wife who may bear him a highly-prized son. The principal of the girl's school promotes virtue and modesty in her female students but has a secret that undermines her authority. An informative view into the most conservative Islamic society from the female point-of-view.

"Wadja" I won't forget your charming face. Your such an independent young lady. See for yourself how strong one person can be against traditions of your country. She is a real fighter. A movie that shows the movement of young people all around the world to bring equality of the sexes!

Wadjda is an endearing heroine, and I loved seeing her story unfold. The cinematography was gorgeous, and the film's message was subtle but clear. I don't know much about Saudi Arabia, so this film offered me a glimpse into that country. I now feel curious to learn more about Saudi life.

I LOVED this movie, and I've seen practically all the block busters and Academy Award winners and nominees.

Interesting film. A quiet but uplifting story. Most of the restrictions on the women shown seemed to come from the local community (rather than religion or laws). But the main character manages to push against those boundaries in a small way!

Set in Saudi Arabia's capital of Riyadh, Wadjda tells the story of a resourceful little girl who dreams of buying a beautiful green bicycle. To raise her bicycle money, Wadjda sells mix tapes and bracelets before eventually entering a Qu'ran recital competition. Wadjda is the first full-length feature film shot in Saudi Arabia and the first feature-length film made by a female Saudi director. Check it out! Recommended by Sonia

this film should be shown to middle school students and discussed. a wonderful film.

Such a lovely movie! A sweet and sometimes sad story, but more importantly, viewers see a culture portrayed by people who are IN that culture. Insightful and moving - plus Wadjda is a wonderful feisty heroine. Great family viewing.

A piece of gold..... A very simple yet touching story.

I just wish they would of extended the movie a little and showed the viewers that Wadjda's mother channeled the strength of her daughter and took the job at the hospital.....

Recommended to the warm hearted....

This film offers a simple-enough story of a young girl that wants to buy a bicycle AND race (and beat) a young male friend in a race. Bear in mind - this happens in a country where the current culture looks down on this kind of behavior. Overall, there were a couple of similarities to "Children of Heaven" but this really gives a "slice-of-life" feel to the daily existence of girls and women in Saudi Arabia. At any rate, this is a beautifully shot film. Recommended for any fan of foreign films.

Wadjda is a young vivacious girl who has the temerity to stand up for herself in a society where riding a bike can make a girl not being able to have children in future and where holding her friend's hand can have her being shunned as sinful. If you like 'Wadjda', make sure not to miss 'The Story of Xiaoyan' (see similar titles section). Both Wadjda and Xiaoyan are young women who blaze a trail in a world where some men continue to delude themselves into believing that women are not their equals.

Gee whiz...if your upbringing, culture and religion raise this many red flags, it's time to reconsider what you have been brain washed to believe. The very reason Jesus was sent down by God to live on earth was to teach love and abolish self-righteousness, hypocrisy and heavy oppression.

Well done movie that's different than most movies made today. Gives you a god glimpse of life in a totally different world. Makes you appreciate living in America-especially if you are a woman!

To understand another culture is important to see it through their own eyes. The story, in my opinion, is irrelevant as it's real intention is to highlight the ways of life of a different culture that is so foreign to us.

A movie of firsts: "Wadjda" (2012) was the first feature shot in Saudi Arabia, the first Saudi feature directed by a woman, and the first Saudi film submitted for best foreign film. Saudi Arabia is a country of paradoxes, an insanely rich oil monarchy, it's also culturally conservative and has an almost medieval view of women, who must be covered and cannot drive, among other things. This charming and low-key feature touches on some of those issues in a low-key way and offers up a subtle triumph of the human spirit theme. If you've seen other Middle Eastern films (particularly from Iran), you'll be familiar with the simple story, unobtrusive filming style, and humanistic tone. I'd also suggest "A Separation," "The White Balloon," and "Taste of Cherry." Music by Max Richter.

Seeing the unwavering determination of the human spirit in the face of unrelenting pressure to break is inspiring and beautiful and heartbreaking. And all of this over a bicycle. People are amazing.